Dignity – The Light Within 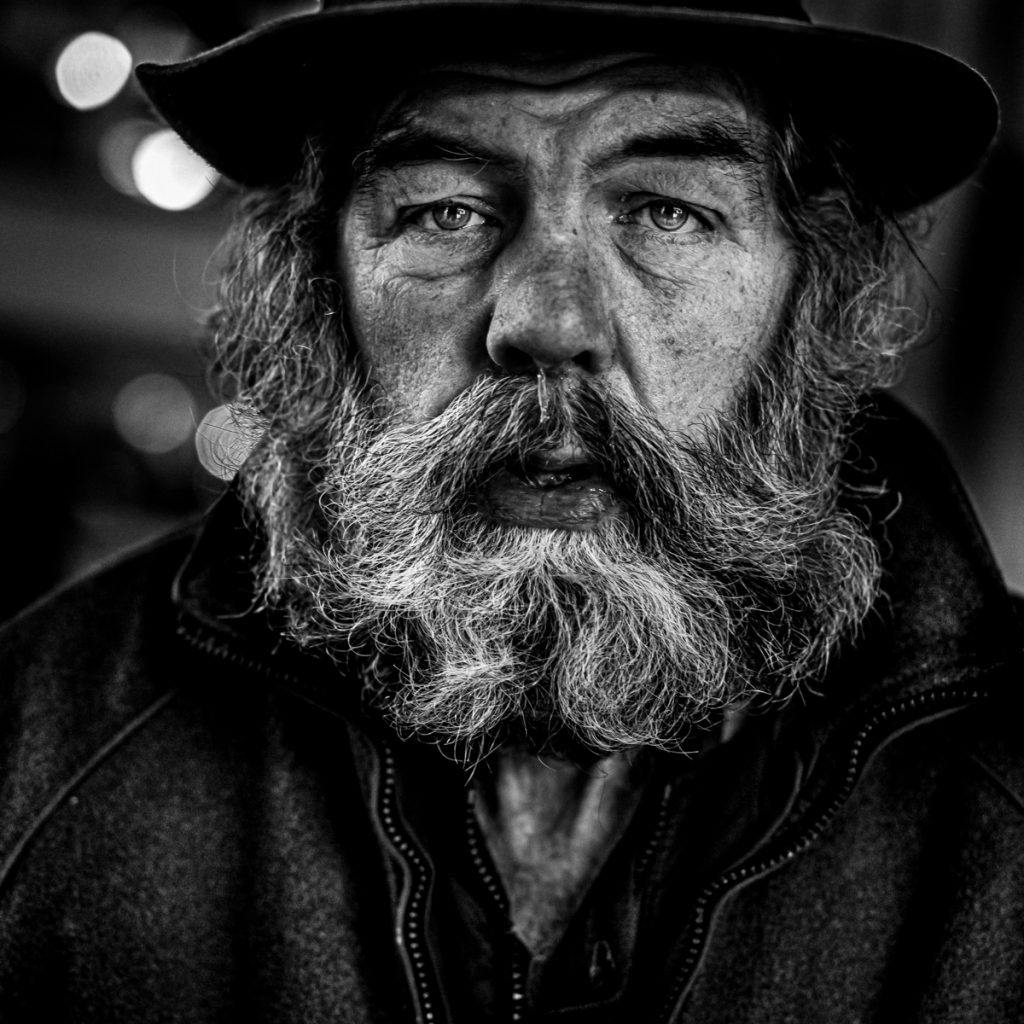 The Museum of Art – DeLand will be featuring the exhibition Renato Rampolla: Dignity – The Light Within, a series of striking, yet sensitive, portraits of the homeless taken by Tampa photographer Renato Rampolla. The exhibition opens January 8, 2021.

Rampolla said he literally grew up on the campus of Sarasota’s Ringling College of Art and Design, where his father Frank was an artist and instructor, and later at University of South Florida after his father accepted a position there.  After his father’s untimely death in 1971 when Ron was eleven, his father’s artist friends remained close to the family.  He had learned the basics of photography from his father and later took classes with Tampa photographer Suzanne Camp Crosby.  He also studied sculpture and composition, but decided to major in history in college.  After graduation, he chose a career in real estate.

Rampolla said he has long enjoyed taking rambling walks around Tampa, often carrying his digital single lens reflex camera.  One day in 2016, he engaged an apparently homeless man in conversation.  “I was curious about his circumstances, and respectful in my approach. He, in turn, was eager for the distraction of a conversation, and appreciative of my interest in him. It was fun for both of us.”

Rampolla asked if he could take a few photos of the man, and recalled that his subject readily agreed, and seemed to enjoy posing for him.  “I went home and printed some 5” x 7” copies of my photos to give to him.  When I tracked him down a few days later, he had no recollection of being photographed,” Rampolla said. “He was off his medications.”

That interaction spurred Rampolla’s interest in meeting and photographing more street people, first in Tampa and then around the country.  “I rediscovered my passion for art, and my curiosity about the human condition,” a trait he said he probably inherited from both his father, whose work reflected strong humanist themes, and his mother, Doris, a therapist who worked with abused children.

Rampolla approaches his subjects by offering food, water, perhaps an article of clothing, and then sits with them for a conversation.  “The homeless don’t always get treated as ‘normal people’ and my aim is to give them the normality – and dignity – they deserve.”

Rampolla always gains permission before photographing his subjects.  He uses a 28mm lens, which he says allows him to get quite close to his subject, often less than a foot away. “I literally want to feel their breath. I want to feel what they feel.”

The portrait series also emphasizes Rampolla’s baroque-influenced technique.  “My father had introduced me to the work of the Italian artist Caravaggio, who pioneered the use of chiaroscuro, which employs strong contrasts between light and dark, and who painted his subjects in a very realistic way. You see that in my work.”

In 2018, Rampolla published a book of his photos titled Dignity No Matter What. It highlights about 40 of the homeless people he has photographed, and he donates all proceeds from the sale of the book to charities that work with the homeless.   A limited number of the books will be available in the Museum’s gift shop at 100 North Woodland Boulevard.

Pattie Pardee, Museum of Art – Deland’s Executive Director, noted that the Museum’s Chris Harris Gallery in their 600 North Woodland Boulevard location is well-suited for the exhibition.  “The strength of Ron’s work is in the intimacy he achieves with his subjects; the intimate setting of the Harris Gallery really enhances the viewer’s own engagement with the photos.”

The Museum of Art – DeLand is a vital and interactive visual arts museum dedicated to the collection, preservation, display and educational use of the fine arts in Central Florida. Established in 1951, the Museum is a 501(c)3 non-profit organization, and is comprised of a 23,000 square foot arts facility housing five galleries on two levels located at 600 N. Woodland Blvd. and the Downtown Galleries located at 100 N. Woodland Blvd. Enriching the community through its permanent collection, art exhibitions and educational programs, the Museum is a source of cultural focus and is recognized statewide by its peers for academic excellence and community outreach. The Museum is supported by its Guild, Krewe Nouveau, grants, admissions, generous patrons and donors, and Museum Store adjacent to its galleries in Downtown DeLand. To learn more about Museum programming, exhibits, and opportunities to engage with the arts visit www.MoArtDeLand.org or on Facebook, Twitter and Instagram.