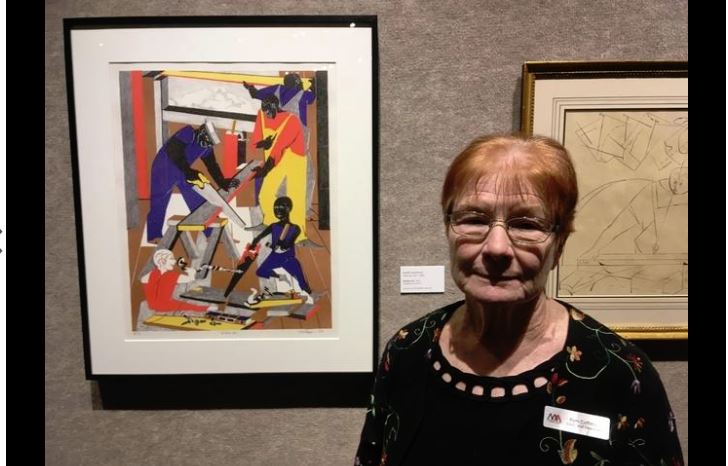 A person in yellow overalls holds a board as another man in blue uses a saw in artist Jacob Lawrence’s 1972 “Builders #1.”

“What he wanted to do was just show what African-Americans did in their daily life,” said Pam Coffman, curator of education at the Museum of Art – DeLand. “They’re very geometric. There’s a strong abstraction to the figures which was what he was known for. He used a lot of flat, bold colors. He didn’t do a lot of shading.”

Lawrence’s print is one of more than 90 pieces by more than 50 artists on display at the museum during the “African-American Art: We Too Dream America” exhibition running through March 17. An exhibition of 31 prints by the prominent 20th century artist is also on display through May 5 at the Museum of Arts & Sciences in Daytona Beach.

The flat, bold colors in “Builders #1” also can be seen in the outfits of African-Americans in Lawrence’s 1975 “Confrontation at the Bridge.” The piece depicts the attack on protest marchers by law enforcement in 1965 on the Edmund Pettus Bridge in Selma, Ala. and is on display at the Museum of Arts & Sciences. It was created after Lawrence was commissioned to make a print marking the United States Bicentennial and includes a dog on the left side of the frame facing down the protestors.

Three series of Lawrence prints are part of the exhibit at the Museum of Arts & Sciences: one focused on the Haitian Revolution leader Toussaint L’Ouverture who lived from 1743 to 1803, one on the 1945 atomic bombing of Hiroshima and one featuring scriptures from the Book of Genesis along with images of a minister. 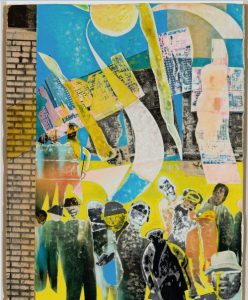 “He’s telling big stories and he wants them understood immediately,” said Ruth Grim, chief curator/Gary R. Libby curator of art. “For Jacob Lawrence, he felt it was important to get a big idea across with a simple style and simple means.”

The prints of Hiroshima are “very graphic,” Grim said.

“They’re disturbing,” she said. “But you have to give him a lot of credit for attempting to show a moment that none of us would ever want to see.”

The Lawrence prints on display at the Museum of Arts & Sciences are from the collection of Lawrence’s Los Angeles friend, Alitash Kebede, and are touring through Landau Traveling Exhibitions.

“We want to make sure that African-American art is really represented well for Black History Month in February,” Grim said. “I look for sources where I can bring it and I look for the best to bring.”

The Museum of Art – DeLand exhibition, meanwhile, goes beyond Lawrence’s work, featuring art that varies from the story quilts of Faith Ringgold to a watercolor and collage by Romare Bearden.

WHAT: “African-American Art: We Too Dream America”

ADMISSION: $10, free for museum members and children 12 and younger

“He would take magazine pictures, he would take photographs and he would combine them to create stories, again, like Jacob Lawrence,” Coffman said of Bearden’s circa 1970 “City Lights.”

The DeLand show includes work on loan from the ACA Galleries in New York and private collectors. It also features 16 pieces from Miami artist Purvis Young that are part of the museum’s permanent collection.

“I would hope that people would come to see the rich history of African-American art, learn about some of the artists and the cultural issues, and then things that are so timely right now,” Coffman said. “The topics, the themes, the concerns these artists were addressing are still things we’re talking about today, right now.”