Retrospective on View through January 6, 2019 at Museum of Art - DeLand 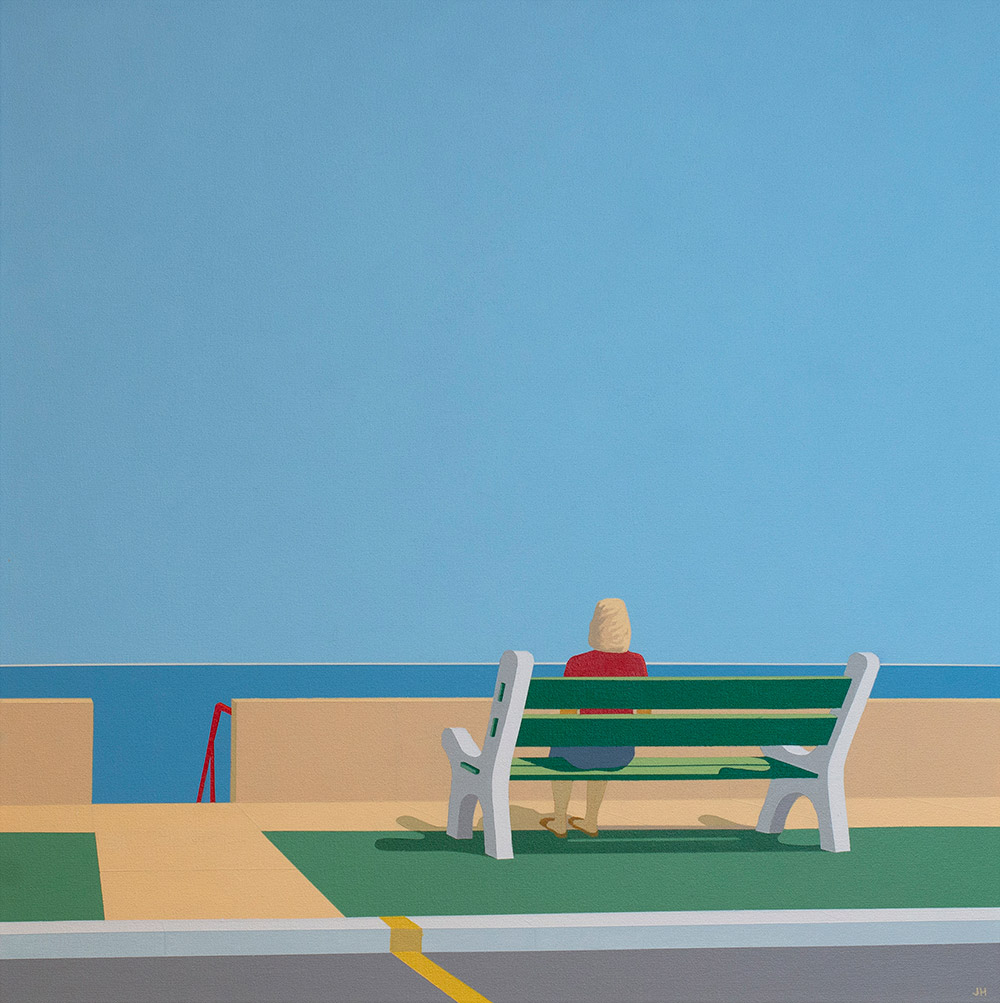 DELAND, FL – DECEMBER 10, 2018 – A rare work by Florida artist Jim Houser is featured in his retrospective exhibition at the Museum of Art – DeLand. His painting “Connie on the Beach,” said his son Jackson Houser, “may be one of the only paintings since 1962 or ’63 that has an actual human figure in it.” The person in that 2015 painting is Connie Houser, the 90-year-old artist’s late wife, who passed away in February 2018.

Houser, who grew up in Jacksonville, “was an abstract expressionist up until the very early ’60s,” Jackson Houser said during the exhibition’s opening reception, which he attended with his father and sister, Katrina. “The story he used to tell is that he was dissatisfied because he knew he wasn’t a great abstract expressionist. He was good but not great.

“One day he was walking out to get the mail, and he saw the mailbox silhouetted against a plain sky and recognized ‘Now that is a great image. It’s not abstract expressionist at all, but it’s an image worth capturing.’ ” Art aficionados may note that Houser’s approach is akin to that of Edward Hopper, a style that Jackson Houser calls “essentialism” – a lack of focus on detail or ornateness of any sort, but which is not captured in the term “minimalism.” Even the acrylic “Connie on the Beach” is “essentialist”: It depicts a blonde woman, viewed from behind and from some distance away, sitting on a green boardwalk bench staring out to sea – two-thirds of the painting is pale blue sky.

Art historians coined the term “Precisionism” to describe the works of Hopper and Charles Sheeler, two artists that Jim Houser confessed to admiring at the reception for his exhibition. Connie Houser, a writer and painter, created several books about her husband’s work. The blurb on “Tranquility: Paintings by Jim Houser” says that Jim Houser “is not only an exceptional painter but an amazing seer, who makes the reduction of the scenes seem so obvious that we wonder why we didn’t see them this way before.”Connie Houser’s “The Letters: Portrait of an Artist, Jim Houser” uses the invented device of back-andforth letters to portray the couple’s family and artistic lives. “There is a profound degree of ‘suchness’ or Zen quality in Jim Houser’s paintings as well as a lyricism not unlike the clear concise resonance of Robert Frost’s shorter verse,” reads part of the book’s summary on amazon.com.

“Jim Houser built his paintings from the ground up,” says George Bulge, chief executive officer of the Museum of Art – DeLand in his exhibition essay, “Jim Houser: Focusing on the Irreducible.””Nothing was left to chance, everything was meticulously planned and ordered with almost mathematical precision,” Bolge writes. “And yet, his oeuvre is rich in association. We don’t just see the painting, we are flooded by memories and feelings triggered by what we see ‘in’ the painting: by our memories and feelings about comfortable, seaside vacation homes, sitting on the beach with the one you love, and lunch at the boardwalk sandwich shop.”

Houser earned his undergraduate degree at the Ringling School of Art, and he also studied at Florida Southern College and the Art Institute of Chicago before earning his MFA from the University of Florida. He taught at public schools in Duval County, Florida, and Baltimore County, Maryland, as well as at Kentucky Wesleyan College and what is now Palm Beach State College before retiring from teaching in 1991. His work has been carried by Grand Control Moderns Gallery and Findlay Galleries in New York City, Gallery Camino Real in Boca Raton, Florida, and others. His numerous awards include the Best in Show Purchase Award at the Seventh Annual Hortt Memorial Show in Fort Lauderdale in 1965, and the Best in Show Purchase Award at the Fort Lauderdale Museum of Arts in 1969. Houser continues to paint at his home in West Palm Beach.

The retrospective exhibition features 42 acrylic works, including one early work, “Fishing Boat” from 1963, and “My Front Door,” which was completed this year.

The Museum of Art – DeLand is a vital and interactive visual arts museum dedicated to the collection, preservation, display and educational use of the fine arts in Central Florida. Established in 1951, the Museum is a 501(c)3 non-profit organization, and is comprised of a 23,000 square foot arts facility housing five galleries on two levels located at 600 N. Woodland Blvd. and the Downtown Galleries located at 100 N. Woodland Blvd. Enriching the community through its permanent collection, art exhibitions and educational programs, the Museum is a source of cultural focus and is recognized statewide by its peers for academic excellence and community outreach. The Museum is supported by its Guild, Krewe Nouveau, grants, admissions, generous patrons and donors, and Museum Store adjacent to its galleries in downtown DeLand. To learn more about the Museum, its programming exhibits and opportunities to engage with the Arts visit us at www.MoArtDeLand.org or on Facebook, Twitter and Instagram.