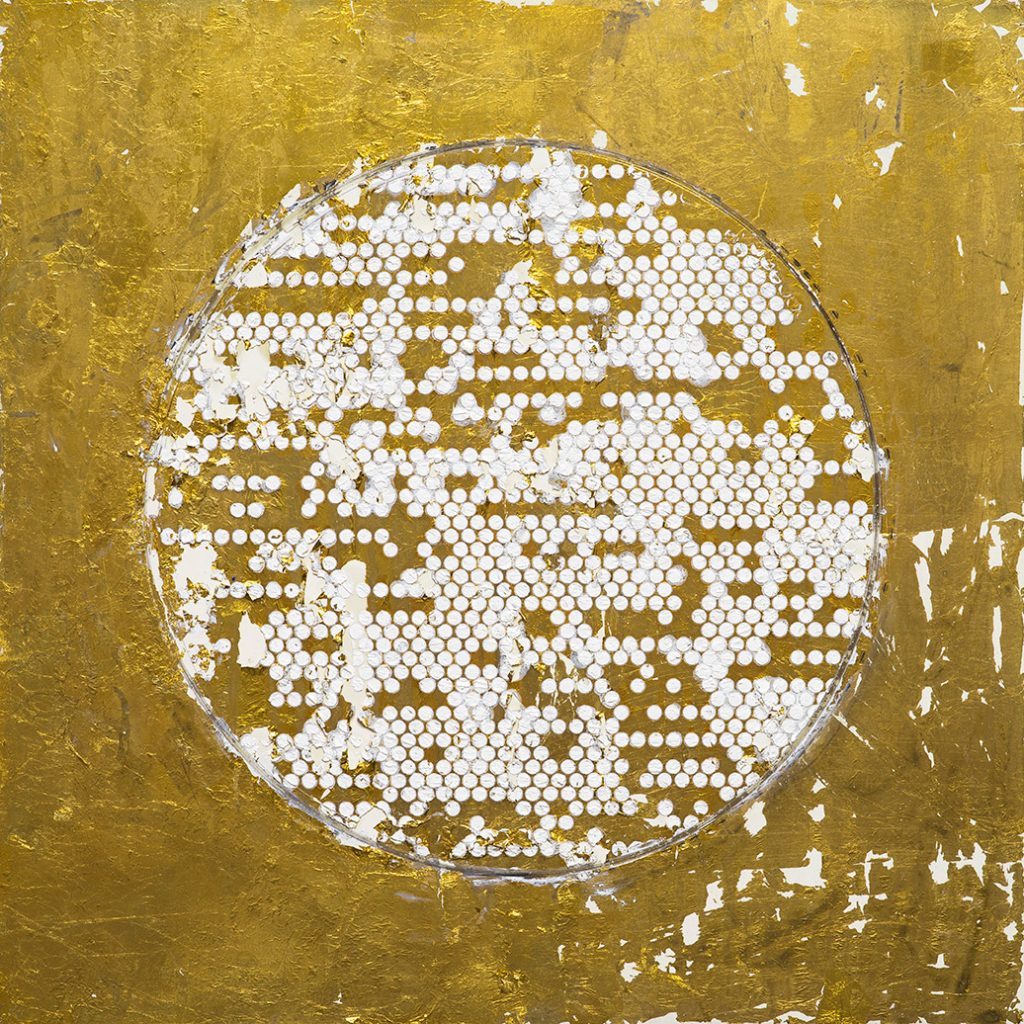 DELAND, FL – DECEMBER 21, 2018 – When artist Barbara Neijna was a child growing up in Philadelphia, her mother would send her outside to play. “There was this huge hill that looked like a mountain to me — it looked like it was going up into space,” Neijna says. “She’d send me out on the hill to play with a bucket and shovel because there were no other children to play with. I didn’t want to be out there, but she said, ‘No, you dig, and if you dig deep enough, you’ll get to China. And if you get to China, you’ll find someone to play with.’ ”

Even as she “would dig ever so carefully and pray that I wouldn’t hurt anyone at the same time,” Neijna says, as a 4-year-old child she had a sense that she was “going to infinity. China meant otherworldliness. It meant beyond. It meant infinity. I was reaching for the other side.” As an artist, Neijna – who has made South Florida her home since 1962 – is still reaching for infinity. Her exhibition “Barbara Neijna – Full Circle: Considering Infinity” is on view now through Jan. 13. 2019, at the Downtown Gallery of the Museum of Art – DeLand.

The 64 mixed media works depict circles, portions of circles, circles in grids, dots and small squares arranged in various grids, and other similar geometrical configurations. Her art is variously created with acrylic, oil bar, gold leaf and-or coin-size pieces of neoprene (a synthetic rubber) suspended in wire grids. The exhibition includes several series of works with multiple pieces in each, with such series titles as “Considering Infinity,” “Elements of Forever and a Day,” “Meditation on Infinity: The Endless Circle” and “Unbounded.” Single works include such titles as “Touch Infinity,” “The Value if Pi” and “Infinity Times 2.”

Neijna, who earned her BFA from Syracuse University and studied at the Academia Belle Brera in Milan, Italy, is known for her large-scale, outdoor geometrical sculptures and installations in public spaces in Philadelphia, South Florida, Tampa, Atlanta and elsewhere. Her works are also in the collections of the Smithsonian Institution in Washington, D.C., the Musee du Pantheon National Haitien in Haiti, the Boca Raton Museum and Art Center, and other museums.

The two-dimensional works of “Full Circle: Considering Infinity” are part of a continuum with her sculptures. “All of the large work comes with the body of work that’s two-dimensional,” she says. “Drawing is a very intimate way and a very personal way of beginning a concept. It’s an evolution to larger-scale work. The imagery that you see here (at the Museum of Art – DeLand) is imagery that has existed since 1960 in my work.” Given the number of works that have the word “infinity” in their title, is Neijna attempting to “portray” infinity? “I would say yes and no,” she says. “I wouldn’t put a single word as to what I’m trying to define.”

But the question returns her to her childhood experience of digging to China – to infinity. “That was something very special to me that stayed with me,” she says. “I mounded up the earth, and the mounds were beautiful. It felt velvety and wonderful.” Her art is a similar exploration. “It doesn’t have to do with math per se,” she says. “It has to do with order. It’s order. It is beginnings and endings. It’s where did we come from and where are we going? It’s a big picture. It’s creating stability, that kind of thing. “It’s who am I? Who are you? Where are we? What is the space between us? The space between us is really what drives a lot of my art because I’m thinking about proximity and I’m thinking about expanding. I’m striving to connect. And in the meantime I’m searching like everybody else. What is it all about?”

Barbara Neijna – Full Circle: Considering Infinity in on exhibit now through Jan. 13. 2019, at the Downtown Gallery of the Museum of Art – DeLand, 100 N. Woodland Blvd., DeLand. Gallery hours are 10 a.m.-4 p.m. Tuesday through Saturday, and 1-4 p.m. Sunday. Regular gallery admission is $5, free for museum members and children 12 and younger. Information: 386-734-4371 or moartdeland.org

The Museum of Art – DeLand is a vital and interactive visual arts museum dedicated to the collection, preservation, display and educational use of the fine arts in Central Florida. Established in 1951, the Museum is a 501(c)3 non-profit organization, and is comprised of a 23,000 square foot arts facility housing five galleries on two levels located at 600 N. Woodland Blvd. and the Downtown Galleries located at 100 N. Woodland Blvd. Enriching the community through its permanent collection, art exhibitions and educational programs, the Museum is a source of cultural focus and is recognized statewide by its peers for academic excellence and community outreach. The Museum is supported by its Guild, Krewe Nouveau, grants, admissions, generous patrons and donors, and Museum Store adjacent to its galleries in downtown DeLand. To learn more about the Museum, its programming exhibits and opportunities to engage with the Arts visit us at www.MoArtDeLand.org or on Facebook, Twitter and Instagram.