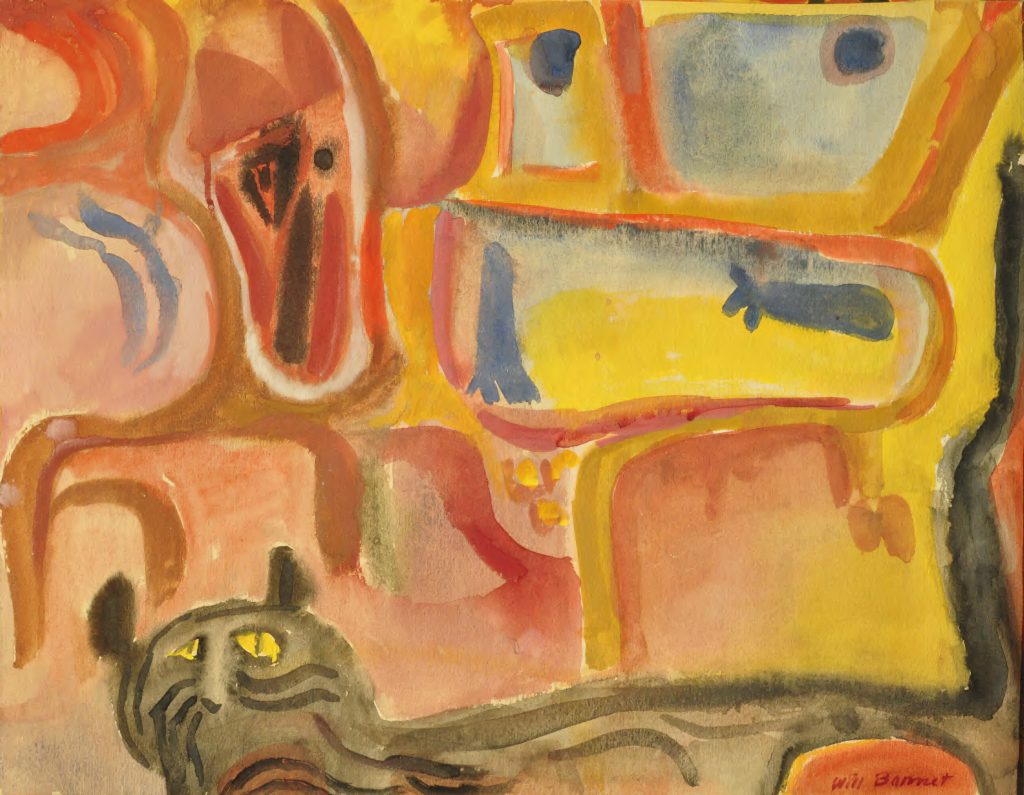 “Memory plays an important part in the idea of immortality. In the end, all we have left is memory.” Very few artists have exhibited such a depth of feeling for personal and family history as Will Barnet.

Barnet was born in 1911 in Beverly, Massachusetts. He was the son of a frequently-absent Russian immigrant father, and a mother who was withdrawn and melancholy. Barnet often found himself alone as a child, a state which was typically reflected in his drawings. His first exposure to art came in the form of the local cemetery in Beverly – its colonial tombstones carved with skulls and other funereal images. “These were mementos of what had taken place,” he recalled. “At the age of 10 or 12, I discovered that being an artist would give me an ability to create something which would live on after death.”

His pictorial form is the outward manifestation of his attitude toward life. It tells us that aloneness is the central human condition, and that man’s salvation and greatness can only come about by confronting and surmounting the pain of that loneliness. But it must be done with fortitude and equanimity.

Barnet trained at the Boston Museum of Fine Arts School and the Art Students League New York. By 1936, he had established himself as a professional printer and the youngest instructor of graphic arts to ever hold a faculty position at the Arts Students League. He later taught art at such prestigious American schools as Yale University and Cornell University.

By the 1940s, Barnet was a renowned painter, printmaker, and prolific graphic artist. His style changed considerably at different points in his career. His earliest works were influenced by expressionism; followed by abstract works in the 1950s and 1960s. From the mid-1960s, Barnet ranged between a simplified form of realism and visionary symbolism in his paintings and prints. In 2003, Barnet changed his approach yet again, returning to abstraction and reengaging with the bold shapes, vivid colors, and dynamic compositions of his 1950s paintings.

Barnet was the recipient of numerous awards, including the first Artist’s Lifetime Achievement Award Medal given on the occasion of the National Academy of Design’s 175th anniversary; the College Art Association’s Lifetime Achievement Award; the Philadelphia Academy of Fine Art’s Lippincott Prize; and the American Academy and Institute of Arts and Letters’ Childe Hassam Prize. He was awarded the 2011 National Medal of Arts by President Barack Obama. In 2012, France conferred on Barnet the insignia of Chevalier of the Order of Arts and Letters.

Barnet died in 2012 at the age of 101. His artistic legacy provides a microcosm of modern movements in the history of American art and of the development of printmaking as a fine art form.