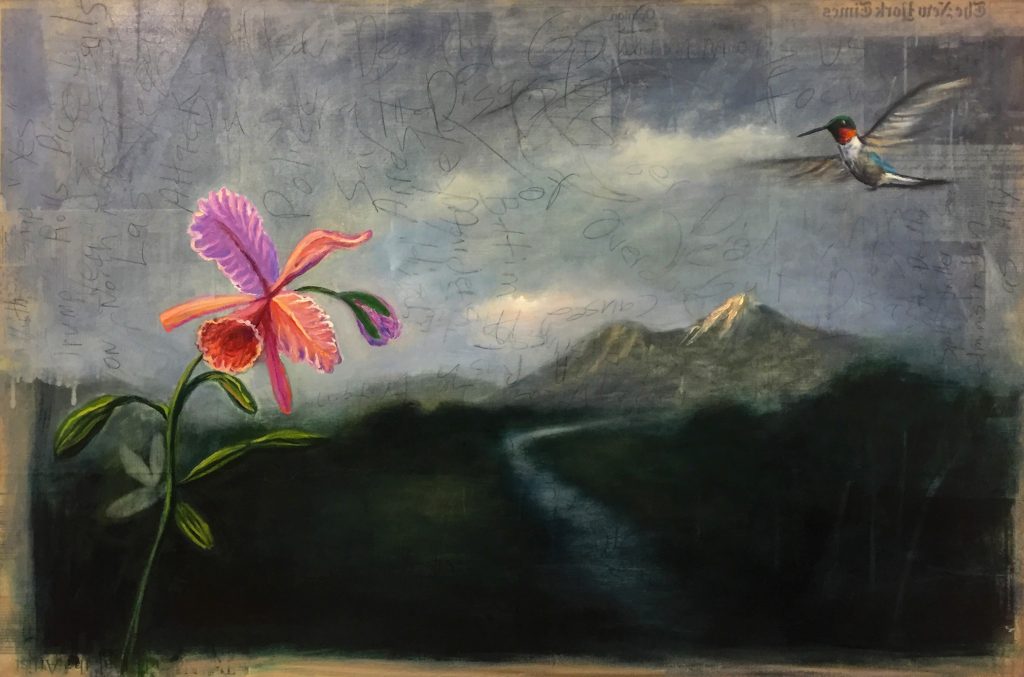 Out of Paradise is an exhibition of paintings by artist Adam Straus, presenting and distorting idealized scenes of the natural world with incisive social commentary and a signature wry humor.

Seductive and gloomily romantic with views of skylines and seascapes, fields, and mountains, the paintings go beyond contemplation, and articulate his concerns about the cruel reality of our planet. In his oils, Straus represents the struggle and survival of mankind and mankind’s effect on nature.

This exhibition of Straus’s work will feature a collection of older pieces as well as more recent ones with a particularly timely relevance. Paintings displayed from his latest series contrast current events from 2016-2020 with an optimistic view of nature’s resilience. They juxtapose classic romantic landscapes of National Parks and images inspired by 19th-century artists with layers of recent newspaper coverage of politics, racial tensions, immigration, human rights, and other issues dominating current events.

Don’t miss this eye-opening exhibition of the paintings of Adam Straus at our downtown gallery this summer.

Adam Straus: Out of Paradise

Adam Straus is an American artist based in Riverhead, New York. Starting as a photographer and sculptor in the the late ’70s and early ’80s, he began making small paintings in 1986 of nocturnal landscapes inspired by his surroundings in north Florida. These paintings were often instilled with a dark humor, social commentary, and framed in the sheet lead he had been using on sculpture.

His technique has evolved throughout the years, but always with a marked personality. In framing the paintings in lead or steel he adds a unique touch, and more recently, his pixelating technique evokes the particulate matter suspended in the air and water.

Straus has exhibited extensively throughout the United States and internationally. His works can be seen in such collections as City of Orlando, FL, Mead Art Museum, Amherst, MA, The Art Museum at F.I.U., Miami, FL, American Express, Fidelity Investments, Boston, Lavandoo Corporation, Geneva, Switzerland, among others. Straus received his B.A. at Miami-Dade Community College, Miami and a B.S. in Mathematics at the University of Florida, Gainesville. He later received his M.F.A. from Florida State University, Tallahassee. Since 1990, he has lived and worked in New York.

Top Image: Adam Straus, Out of Paradise: After Heade, 2018, Oil and graphite on newspaper transferred and adhered to wood, framed in lead, 34 x 50 x 2 in.