ZEITGEIST:  THE WORLD OF SANDY WINTERS 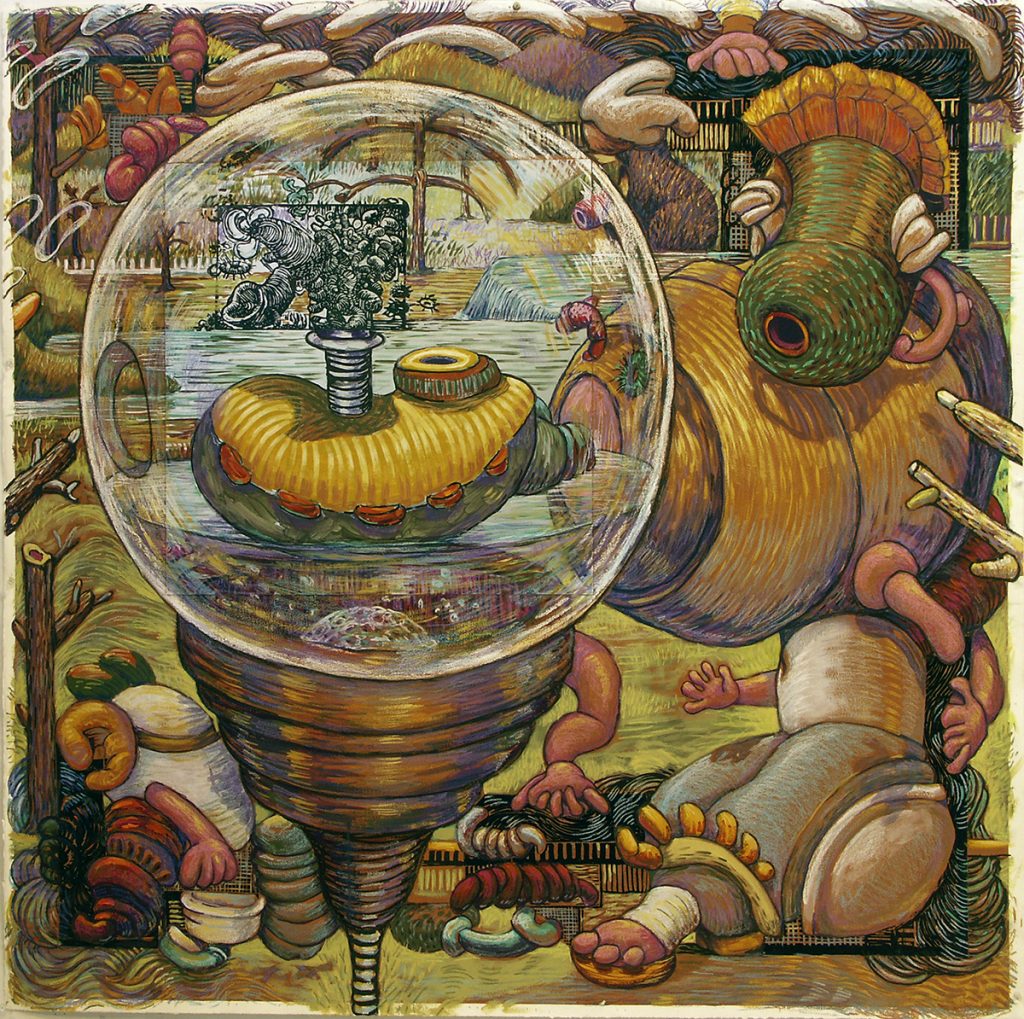 In 1817, Goethe wrote that all cultures go through four stages. The first is one of community and powerfully shared symbols and visions. The second and third become progressively analytical and abstract. And the fourth stage is characterized as follows: “Human need, aggravated by the course of history, leaps backwards, confuses priestly folk, and religious beliefs, grabs now here, now there, at traditions, submerges itself in mysteries, sets fairy tales in the place of poetry, and elevates these to articles of belief.” 1

In this exhibition, of Sandy Winter’s work completed during the past several years, one can sense the artist’s sudden shift in sensibility. The analytical and the formal are rejected, and strange new kinds of historicism, primitivism, and expressionism are embraced. There is a demi-allegory here that seemingly has not made up its mind whether to persuade, as in an argument, or to dissemble, like art; whether to consort with pain and despair, or to yield to an irrepressible desire to affirm humane values in man’s all-to-brief existence on Earth. With a seeming will of its own, the mixed media work in this exhibition cheerfully subverts its illusion to come down on the artist’s side as an unexpected, purely creative affirmation, perhaps attaining, thereby, an even more persuasive impact than by restating the familiar miseries and visual clichés of man’s solitary fate.

In Sandy Winters’ poetic creations, it is not a question of overcoming the material, as the futile aesthetics extolled by so many people would have it, but of freeing the materials. Paintings, drawings and prints undergo a transformation as soon as they enter into the sphere of her art work. They change their nature; they embody something that transcends and governs them. Without losing their first values, they acquire, thanks to pictorial art, a great importance and, at the same time, constitute a sort of flash that opens access to another world to us.

This artist’s touch is purely and simply what it is – rhythm, color, composition – and, at the same time, something else, another creative power of forms, a transparent material. The “touch” is the creation that goes further than the materials.

Paradoxically, what goes further than the mixed media elements can be achieved only by mixed media elements, and surpasses the simple and happy inventions of technique: it is a creation of forms. Winters gives back to the very being of her material its original nature. As a good servant of pictorial art, she transforms it into a contradictory method. Her art constantly surpasses its history and its style. It becomes the result and the sum of all these elements: experience, feeling, emotion, intuition, unconscious thought, and looking.

Winters’ art is primitive in a higher way. The creation of another rhythm, imitation, a copy of the true idea, madness, ecstasy, a childlike expression of the animal depths, nostalgia for a hidden world, the asceticism and sensuality of the game, a visionary moment, universal harmony – her art shows all faces. One of the faces it shows is the absurd megalomania of all human aspirations – the portrait.

When this artist invents a manner or a style, she ceases to be a creator and turns into a designer fabricating products of applied art. Style is an external, decorative element. Sometimes Winters is governed or defeated by a style that does not belong uniquely to her but belongs to the period. In a sense, she has no style; she is the servant of her material and transcends it with absolute freedom.

In her most recent work, physicality, for example, is expressed simply as technical prowess; at other times, it is ritualized action, a psychosexual event. A corollary to the expression of human nature as savage or childlike can be seen, also, in pieces such as these; civilization and civilized skills exist as a thin, artificial veneer.

The themes pursued in this artist’s work, however, are not as simple as that. The artist seems to be paraphrasing the statement that the Conceptualist, Douglas Huebler, made as a work of art in 1969: “The world is full of objects, more or less interesting; I do not wish to add any more. I prefer simply to state the existence of things…” Winters appears to be expressing a similar feeling – not toward objects, but toward images. As another Conceptualist, Joseph Kosuth, observed in 1982, the rebirth of painting is “not simply painting but a reference to painting as if the artists are using the found fragments of a broken discourse.” 3

Earlier in our century, when Expressionist and Surrealists explored the subjective and the “subconscious,” it was in a spirit akin to the then-new science of psychoanalysis and in an age of rational ideals. Sandy Winters has different motives. Acting out the compulsions of the psyche physically instead of dissecting them analytically, she is attempting to retrieve or, at least, to represent atrophied instincts as well as critiquing the images bequeathed us from styles of the modern past. Her work seems to be less involved with abstract forms than with representing the externalized images of abstract forms by “mark-making”.

Although identity may have been a central concern of the seventies, nonentity is more pertinent now. When a work of art is inhabited by pre-existing images and forms, or simulates emotional gestures to express an angst of emptiness, it is the lack of identity that comes to the fore. That is one of the consequences of the loss of faith in the modernist ethos of originality. But when the reactionary is seen as the radical, the past as the future, the old as the new, and the spurious as the genuine, broader issues of individuality and authenticity crop up. The present retreat, with its desire for falsity, for manipulated images, repossessed styles, prepackaged forms, is an ambivalent attempt to return to old values. As modernist belief systems are becoming increasingly inadequate, artists are exposing awful truths and giving profound warning.

In the late stage of a culture which is cast adrift in contradictions, haunted by myths of history and style and by omens of vulnerability, Sandy Winters is uneasily grabbing hold of traditions, however spurious they may be, and elevating them to stave off disbelief. She draws upon the elementary symbolism that has accompanied human history. For her, the work of art is not so much an ideal product as an activity through which the individual asserts her sense of life. Her art can be compared to a process, a living tracing of the ceaseless activity of the imagination. We can think about her art in terms of a new Zeitgeist, a sudden break with the past, an unexpected reversal of taste, or we can call it a last waltz with modernism.