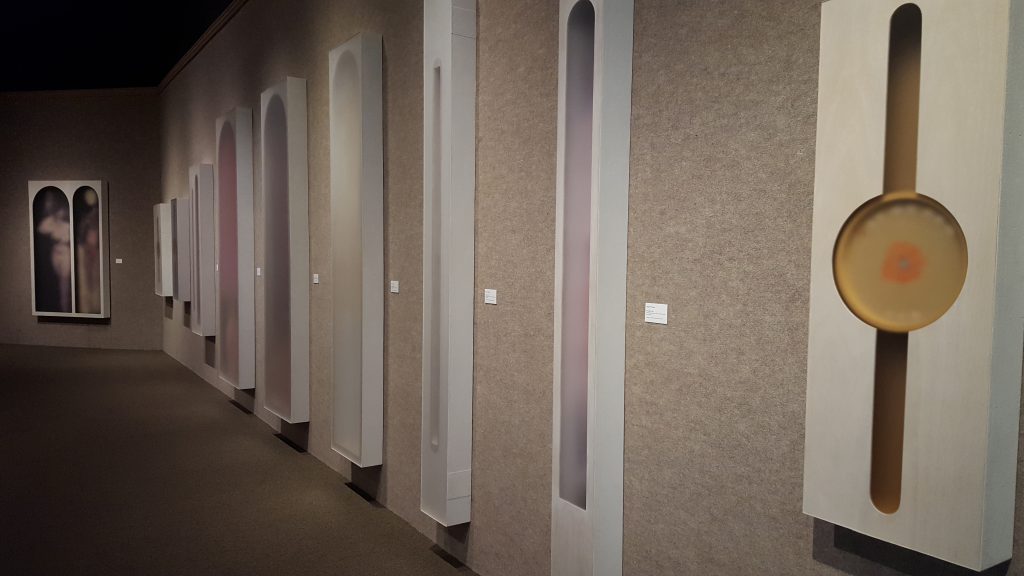 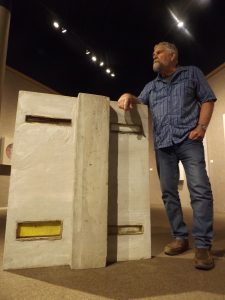 View “The Art of Containment,” sculptor Robert Thiele’s exhibition at the Museum of Art – DeLand, and you realize the artist is a trickster, a control freak or an agitator – or perhaps all three.

“The Art of Containment” also could be titled “The Art of Concealment.” If you want to see – or have a chance of seeing — the objects and the photographs of faces, the occasional nude woman or the reproduction of a Matisse painting that Thiele has tucked inside his wooden and laminated canvas boxes, he will tell you to stand back.

That’s because many of the wall-hung works are fronted by sheets of hazy, translucent, acid-etched acrylic, rendering the contents inside tantalizingly obscured.

“People get closer thinking they will see more,” but the peculiarities of the etched acrylic mean “they actually see less,” said Thiele, a Wisconsin native who now divides his time between Brooklyn and Miami. “The ideal place is 10 feet back.”

At the exhibition’s opening reception on March 29, many a patron confessed, surreptitiously but aloud, that they were intrigued, befuddled, fascinated and-or frustrated by Thiele’s tactic. Keep in mind, however, that some of his box-y works feature clear acrylic, while other geometric works both large and small — cubes, rectangles, tube-like sections and more, fashioned from wood, plaster, concrete, laminated canvas and other Home Depot-like media – are un-boxed and “naked.”

Thiele laughed and an impish grin played across his face when asked at the opening reception if such concealing tactics in his art may be a metaphor for himself.

“I was talking to someone about my work years and years ago,” he said. “I had just gotten divorced and I was telling them, ‘Well, the closer you get to the work, the less you see.’ And my ex-wife said, ‘That’s exactly what he does. That’s him in a nutshell.’ ”

Maybe Thiele is a trickster who enjoys toying with viewers’ perceptions. Maybe he’s a control freak who is determined to maintain an artistic comfort zone and keep people that desired 10 feet away from his work. Perhaps he’s a subscriber to the “artists are agitators” credo.

Regardless, “The Art of Containment” is engaging and intriguing whether one is peering through that obfuscating acrylic or at works unencumbered by those pesky sheets.

Upon first glance, one may think “Brummage,” Thiele’s arrangement of three brawny, upright, rectangular slabs of concrete, is akin to that Dadaist trickster Marcel Duchamp, who 100 years ago declared a porcelain urinal to be a work of art, titled it “Fountain” and demanded that it be displayed in an exhibition. (With the original “Fountain” lost, Duchamp purchased another urinal in 1950, inscribed it just like the original, and declared it to be art – it’s that version which today resides at the Philadelphia Museum of Art. Duchamp also authorized other replicas.)

It’s conceivable that someone might proclaim, “So, this Thiele guy salvaged these concrete slabs from a construction site, lugged them to a museum and called it art!”

Not so fast. Thiele’s arrangement of his slabs, which he cast himself, and the colored wood and glass rectangles that he embedded in them give “Brummage” an austere but strange resonance. Sitting squat in the middle of the museum’s main exhibition room (and perfectly placed there), “Brummage” even exudes a magical-spiritual resonance akin to those ancient standing stones that litter the landscape of Ireland and the British Isles. (Plenty of those pillars, mind you, are far smaller than Stonehenge, yet they radiate a magnetic aura exactly because they are human-size.)

“Brummage” may even summon visions of that monolith that appears among the ape-like proto-humans in the opening sequence of the film “2001: A Space Odyssey.”

“Velba,” a table-top piece that combines concrete, encaustic, oil and other media into its 15x11x8-inch size, somewhat resembles a Mesoamerican pyramid and, like “Brummage,” embodies a primal, ritualistic presence. Indeed, “Velba” could readily replace that arcane “Object” featured on the cover of the album “Presence” by the rock band Led Zeppelin.

One can imagine the trickster in Thiele erecting “Brummage” or placing “Velba” in some remote forest or desert so that archaeologists who discover them centuries from now will ponder their religious significance to us present-day humans. 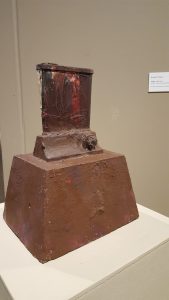 That maddening (to some), hazy acrylic comes into mischievous play in “To V-94,” a huge box work (76x48x5 inches) that contains, and obscures, two images. One is what appears to be a standing nude woman seemingly rendered in a daguerreotype, that grainy, black-and-white photographic process invented in 1839. Something – a capuchin monkey, an alien plant? – lurks on her right shoulder.

While Thiele is coy about the identity of the obscured nude woman, except to say it’s an image he didn’t create, he is more forthcoming about the figure on the right, and indeed astute art fans will recognize it even through the obfuscation.

“The figure on the right side is from my favorite painting in the world, ‘Bathers by a River’ by Matisse,” Thiele said. “It’s in the Art Institute of Chicago. When I go up to Chicago, I have to go there and I sit in front of that painting for half an hour. That right figure was ‘stolen’ from that and blown up.”

What is Thiele’s intent with “To V-94”? Is this a provocation to contemplate the nature of voyeurism? The daguerreotype nude will make viewers feel as if they have peeked inside the tent of some Victorian-era Kinetoscope peepshow. The stylized nude of the Matisse is, of course, perceived as high art.

Looking at the proverbial, metaphorical “bigger picture,” is Thiele’s compulsion to box images and objects, and to control how much of them one can see, evidence of some sort of “artist as God” syndrome? Yes, the idea that artists possess delusions of God-hood, leading them to create and thus “control” their own little worlds, is a common cliché that can be applied to all creators, but it seems especially apropos to Thiele and his modus operandi.

Or is Thiele perhaps a Trickster (note the capital “T”) akin to Coyote and Raven in the folklore of Native Americans – creatures who delight in stirring up mischief, then sit back and watch humans’ reactions?

“The Art of Containment” contains many such questions.