On the Outside Looking In: The Photographer as “Outsider” in “Gary Monroe: Photographs and Revelations” 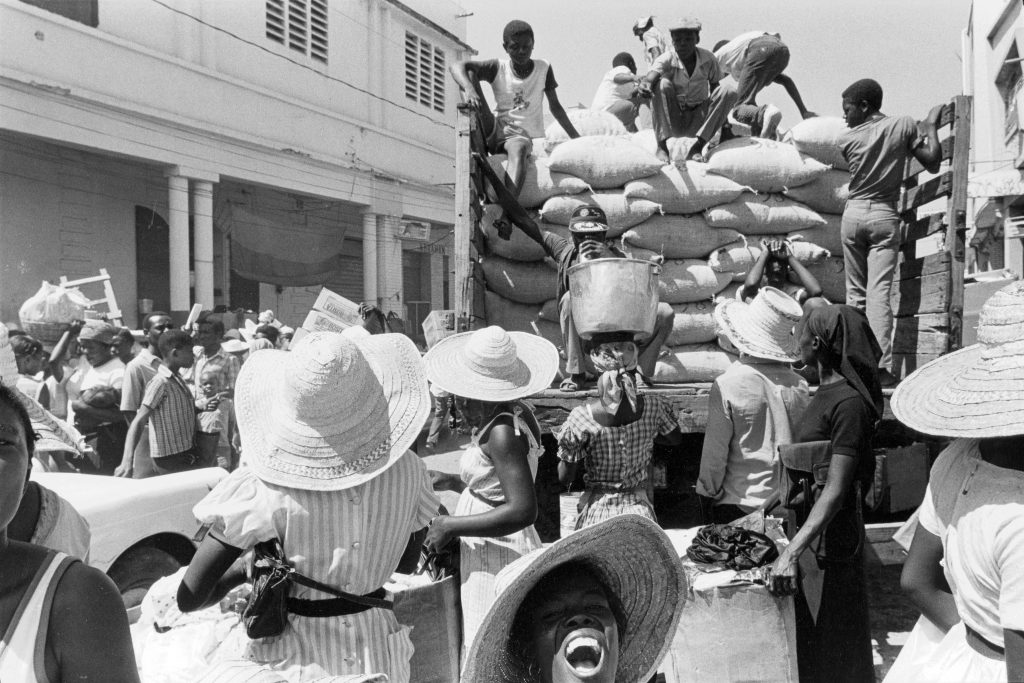 Yes, it’s a cliché, but also a truism, that photographers often are invisibles behind their cameras, that they are “outsiders” – and not just photojournalists and documentary photogs. Don’t become part of the “story” of their subjects, they are told, either by their own inner voice or by those of us who view their views of the world.

Thank the gods that Ansel Adams wasn’t compelled to jump in front of his tripod-mounted camera lens and take a selfie that day he spied the moon rising over the Sangre de Christo Mountains near Hernandez, New Mexico.

Gordon Parks had the sense not to share the frame with that “Washington, D.C. government charwoman.”

The late Jack Mitchell’s stark black-and-white portraits of playwrights, poets, painters, actors and musicians fill the Atlantic Center for the Arts in New Smyrna Beach, his hometown, and graced the pages of the New York Times and other top-flight publications. We are grateful he spent his physical and psychic energy capturing the souls of such subjects as, say, John Lennon and Yoko Ono rather than himself.

Photographers are such invisible creators that we viewers of their art take their hiddenness for granted, and we hardly give their “absence” a second thought.

Such is not the case with painters and sculptors. We see Van Gogh’s “The Starry Night,” Jackson Pollock’s splatters, Dali’s melting clocks, Alberto Giacometti’s gaunt, “stick figure” sculptures or Georgia O’Keeffe’s animal skulls suspended in front of the mountain Pedernal, and we can’t help but ponder the nature of the psyches behind these works.

Thanks to a simple but inspired, genius idea, viewers of the exhibit “Gary Monroe: Photographs and Revelations” at the Downtown Gallery of the Museum of Art – DeLand will be able to peer behind the curtain at the man behind the camera lens.

The works by those outsider (that is, self-taught) artists include the frolicking humanoids of the acrylic work “Alien Guardians” by Milton Ellis, the tribal/primitive faces of the acrylic “Gather Inspection” by Tony Garan, and a striking, mixed-media bust of a young man rendered in an unidentified material and colored in bright reds, blues, greens and yellows, and attributed only to “Child’s Art (Matt).”

As for his interest in outsider art, Monroe says he has “always loved that raw energy of untrained artists. Their awareness, their imagery was just powerful in unbridled ways.”

The exhibit’s objects are mostly “outsider” too, in their own way. There’s some kitschy stuff, but mostly its Americana, although that label can be a bit misleading – this is Americana in the sense of writer William Least Heat Moon’s use of the term “blue highways,” a reference to when color-coded paper maps used blue to indicate lesser-used roads.

Monroe’s artifacts include a snake-head walking stick, a bar room coin game, a hat stretcher, a bottle-cap art stand, a “Men in Trees” roadside warning sign, an ancient and oversized orange-juice squeezer, a tourism promotional placard that trumpets “Florida for FUN Pictures!” over a cartoonish illustration of a sombrero-wearing woman, and more. 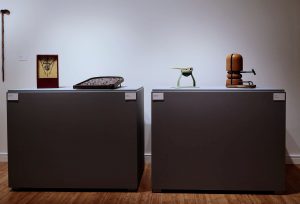 Monroe obviously has an affinity for outsiders, and viewers of “Photographs and Revelations” can’t help but play amateur psychologist and conclude that Monroe must keenly feel like an outsider himself behind his camera.

That revelation – the photographer as outsider – is not, as stated, new news. It’s the default status assigned to those who create such art. That revelation is not essential to engaging the main event in this exhibition: Monroe’s riveting photos. But that revelation, manifested and reinforced by those outsider artworks and Americana objects, adds a potent layer too seldom seen in photography exhibitions.

Yes, Monroe’s photography can and does stand on its own. The exhibit includes 46 black-and-white photographs taken by Monroe over 45 years during his travels across Florida and to Haiti, Brazil, Mexico, India, Egypt and other countries. His subjects include carnival revelers in Haiti, a Day of the Dead parade in Mexico, a party for gay men in Cuba, a spiritual reading at Cassadaga, a baptism in Clearwater, Buddhist monks in India, tourists at Disney World, the now-vanished, old-world Jewish culture of South Beach in Miami, and more. 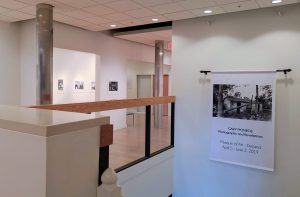 Yes, Monroe’s globetrotting means that he often has been literally a stranger in a strange, foreign land. It’s not a great leap of the mind to realize that an “outsider” is right there behind the camera of these photos taken of those gay men at that party outside Havana, or the crudely masked and cow-horned celebrants at that arcane carnival in Haiti.

Yet Monroe’s photos closer to home seem just as “outsider”: His photo of a baptism in Clearwater, Florida, for example. Or the two elderly, bathing-capped women standing in thigh-high ocean water – a photo, it’s safe to assume given its 1980 date, from his project to document the now-gone “old-world” Jewish community of South Beach, where he grew up.

Although Monroe is Jewish, even that project cast him into an outsider role: “I’m Jewish, but my generation is essentially Americanized Jews. That old-world culture was on its way out.”

Monroe’s 1996 photo of a spiritual reading in Cassadaga may be his most intimate work in the entire exhibition. The shadowy scene shows a man and a woman holding hands across a table – the woman lit by soft light and the man barely visible in darkness. 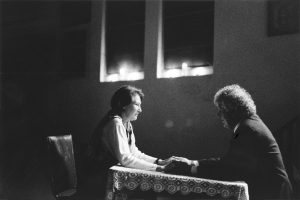 It is Spiritualist belief that not just the soul but one’s personality survives after death, and that the living, with or without the help of a medium, can communicate with the deceased. We don’t even know who is the medium and who is the seeker in Monroe’s arresting photo, and yet the “presence” of faith, of hope, of comfort, of the search for intimacy across the great divide of life and death is potently and beautifully captured here.

In a few of these photos, a person is caught eyeing the cameraman, and the “wall” between subject and documentarian is broken down. That happens with the photo of a cig-smoking Haitian refugee in a Miami resettlement camp. And it’s apparent in the defiant stare of a man in Haiti with a giant pickaxe bizarrely balanced on his head – an image so striking that one wonders at first if the ax has been buried in his skull.

The irony, of course, is that we mostly are not overtly aware of Monroe’s presence behind his camera in these photos, despite the exhibition’s barely disguised “outsider” theme.

This may be a function of Monroe’s process more than we viewers realize. Even Monroe himself doesn’t have time to stop and contemplate his own presence in his work, due to his on-the-move modus operandi.

“The trick is to make photographs that look easy, as if the images formed themselves,” he says in his artist’s statement for the exhibit. “It is inversely difficult. A step to the left or a bend of the knee meaningfully changes an image. I complicate things by increasingly not breaking stride in environments in which people are on the go, so arriving at an image with any structural coherence is a minor miracle. Millimeters matter. Indeed, my photographs are predicated more on a deep breath and a prayer rather than on compositional skill or beautiful light.”

He’s not kidding about that prayer aspect.

Monroe’s career, which includes 31 years as a visual arts/photography professor at Daytona State College before his retirement in 2018, has spanned both the film and digital camera eras. But he still almost exclusively uses his trusty, “old, old” Leica film camera and creates his own black-and-white prints in his own darkroom.

That means that Monroe, unlike digital photographers, is an outsider to his own art when he’s out in the field – he doesn’t know what his camera has captured until he returns back home and emerges from his darkroom.

“I have no common sense, I guess,” Monroe says with a chuckle when asked why he prefers film over digital technology. “Printing and darkroom work are very archaic.”

He confesses that he taught himself digital photography and Photoshop “so that I could maintain some relevancy to my students (at DSC). I enjoyed using the digital camera, but that was an adjunct. I don’t use it much anymore.”

However, he doesn’t believe film gives him any sort of aesthetic advantage.

“No, not at all,” he says. “It’s something about the process. I like the discipline of using film and working in the darkroom, but it makes no sense in today’s world. I had students who were gravitating toward film but I tended to discourage them (laughs).”

A photographer who still uses film – yet more evidence of Monroe’s outsider status. Yet it’s his outsider status that has taken us magnificently inside cultures around the world and close to home – and brought us revelations of the lives of strangers and our neighbors alike.