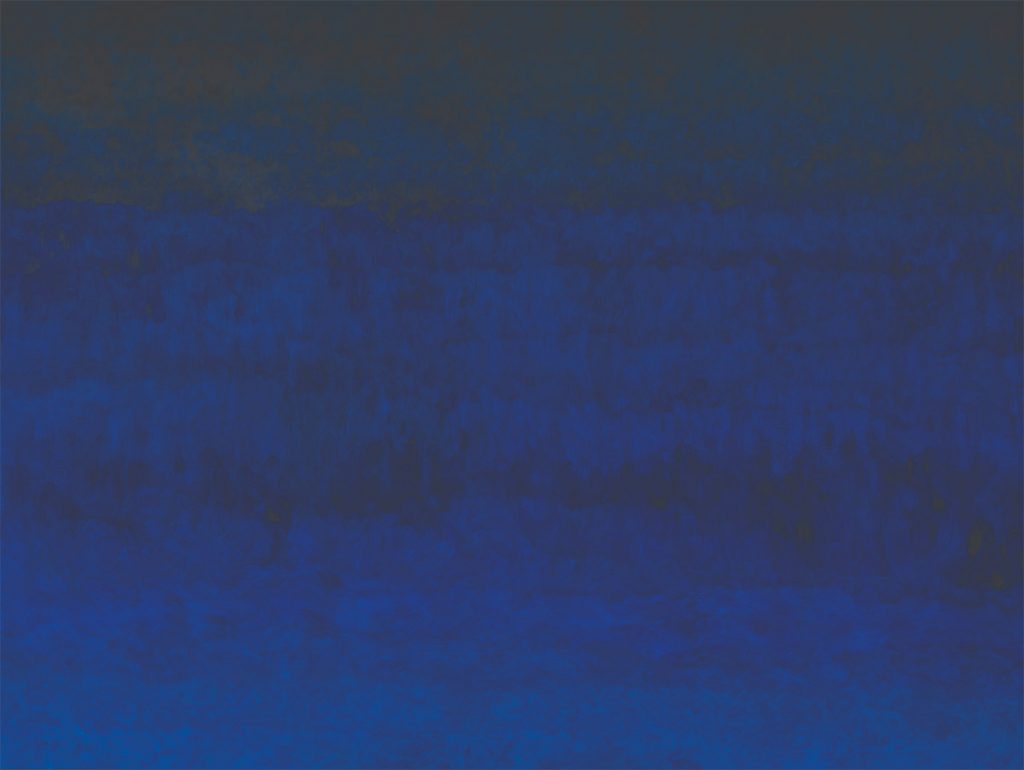 Perhaps a bit of cheekiness drove South Florida artist Janet Siegel Rogers to title one of her paintings “Pure Light.”

What artist, from Og the Caveman to 19th-century Englishman J.M.W. Turner, from Albert Bierstadt and his luminist landscapes of the American West to impressionist Claude Monet, hasn’t attempted to capture the true nature of light on canvas?

Rogers’s efforts are on display at the exhibition “Janet Siegel Rogers: Retrospective,” which runs Aug. 25 through Oct. 21 at the Downtown Gallery of the Museum of Art – DeLand.

No, Rogers isn’t pursuing the grail of evanescent light evident in, say, such landscapes as Turner’s “Norham Castle: Sunrise” or Bierstadt’s “Among the Sierra Nevada, California.”

Instead Rogers is after far different game. Her fascination with light is captured in huge canvases that, at first glance, are dominated by two or three large color fields that blend into each other. These are expressionist-minimalist works that echo Mark Rothko and are composed of vivid reds, blues, yellows and oranges, as well as occasional pale color-scapes or dark color-scapes composed of indigos and charcoal grays.

But a closer look – or, more accurately, a shift in one’s viewing perspective – reveals more. As a viewer moves slightly from side to side, one witnesses textured, rhythmic brushstrokes and multiple shades of color emerge and shift, as if colored bees were buzzing on the surface of her canvases.

And no wonder: Rogers, who earned her Master of Fine Art degree from the Pratt Institute in Brooklyn, creates via encaustic painting, a technique that dates back to the ancient Greeks and utilizes oil paint mixed with hot beeswax. The beeswax suspends the pigments of the oil paint into various layers and allows light into the surface of the painting, where that light is refracted and thus creates various hues.

The results, in the case of Rogers, are arresting and startlingly kinetic. Suddenly these minimalist paintings don’t seem so minimalist or “simple.” Rogers, it seems, has not only captured light but is portraying energy itself.

A number of Rogers’ works, both her encaustic pieces and the handful of her equally minimalist, pure oil paintings (with no beeswax), feature a stark, vivid horizontal line dissecting the entire canvas. That striking feature takes on meaning when one learns that Rogers lives near the beach and has noted that “the Everglades, the skies and the waters all influence my work.”

Therefore the titles of some of her paintings, such as “Everglades Night,” “Emerald Waters” and “Early Rising,” suggest their lines could be the horizon between water and sky.

“Emerald Waters” may be the most “conventional” work in the exhibition – viewers will readily luxuriate in its rich blue-and-green sky and seascape.

But a painting such as “Night Fire,” a 1989 4-by-8-foot work composed of deep purples and indigos with hints of crimson at the top – all swirling and shapeshifting as one changes one’s angle of perception – may be just as representational a work: It’s as if Rogers was inspired by Turner’s “The Burning of the Houses of Lords and Commons” and, in her own pursuit of capturing fire at night, created an extreme detail of the English master’s scene.

More directly, Rogers nods to French Impressionism with a 1992 yellow and pink work she titled “Monet Revisited,” although it’s as abstract as any work in the show.

The color fields and stark, even jarring horizontal lines of other works, such as “Vibrato” and “Vermilion Light Revisited,” are equally abstract and open to vast interpretation.

Those two works may prod fans of writer Kurt Vonnegut to recall his fictional abstract expressionist artist Rabo Karabekian, whose portrait of the temptation of St. Anthony consisted of a lone, vertical orange line – “an unwavering band of light” — in a field of lime green.

In Vonnegut’s novel “Breakfast of Champions,” a woman tells Karabekian she has “seen better pictures done by a five-year-old.” (Indeed, a recent patron of the Rogers exhibition was heard to say, “I can do that!” Perhaps he was speaking tongue-in-cheek.)

Karabekian responds to his critic: “I now give you my word of honor that the picture . . . shows everything about life which truly matters, with nothing left out. It is a picture of the awareness of every animal . . . . Our awareness is all that is alive and maybe sacred in any of us. Everything else about us is dead machinery.”

Less metaphysically – or perhaps not — a number of Rogers’s paintings recall spectrometry and the way that process disperses light into swaths of color via a prism. Likewise, if Einstein had asked an artist to create portraits of pure energy, such works by Rogers would have thrilled the famous physicist.

However one interprets the unwavering bands of light (including some vertical ones as well) that run through Rogers’s works, she frequently gives musical or playful titles to paintings with the most vivid hues: “Blue Symphony II,” “Crescendo – Theme and Variation 1,” “Ice Heat,” Foxy Red” and the aforementioned “Vibrato” with its lipstick-red line piercing indigos and bright blues.

As for Rogers’s “Pure Light”? No, it’s not some pure white or blank canvas a la some Dadaist trickery or the fictional piece that is at the center of “Art,” Yasmina Reza’s 1994 play. Rather, the curiously titled “Pure Light” is a 1-by-6-foot encaustic work composed of hues of white, pale green and whispers of pale blue and pink. The strongest whites arise like wraiths from that ever-present horizontal line.

George Bolge, Chief Executive Officer of the Museum of Art – DeLand, astutely notes that Rogers’s art “suggests music, long walks through magical gardens or deep, underwater landscapes. Rogers, in other words, is not a formal purist, a designer and architect of abstract compositions intended to stand strictly on their own without any reference to other things, places or events. She is a visual poet whose surfaces actually exist to enchant us with intimations and

evocations of things we can sense but never quite see. This art beckons us toward it rather than dares us to understand what it is all about.”

Whether Rogers’s “intimations” recall a sunrise or glowing moon, evoke scientific spectrometry, seem to be color for color’s sake, or summon esoteric thoughts of that sacred “awareness” cited by Vonnegut’s fictional artist, she has succeeded in making light dance and shapeshift amid her splashes of oil and beeswax.

Rick de Yampert is a freelance writer and musician. Previously he was the arts and entertainment writer for 23 years at the Daytona Beach News-Journal, where he profiled artists and wrote about museum and gallery exhibitions throughout Central Florida.