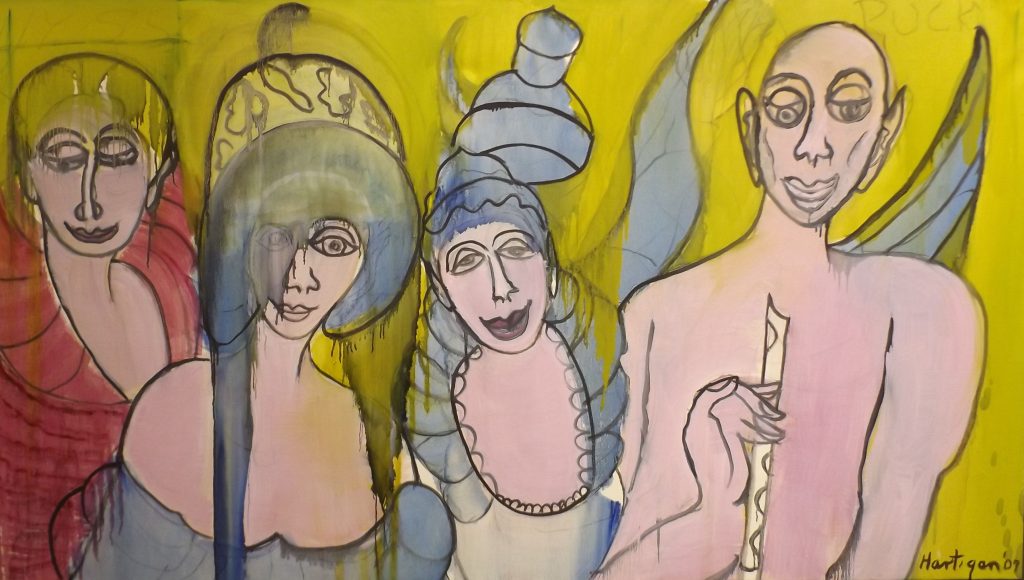 In 1950, renowned art critic Clement Greenberg was smitten by the work of Grace Hartigan, a 28-year-old “second generation” Abstract Expressionist who was following the chaotic trails blazed by the big boys of the movement, Jackson Pollock and Willem de Kooning.

Greenberg had been one of the first critics to champion Pollock’s exquisite splatters, and he sniffed a worthy successor in the youthful Hartigan. So, Greenberg and art historian Meyer Schapiro invited Hartigan to show in an exhibition they were curating, titled “New Talents.”

The exhibit brought Hartigan her first major critical acclaim, but things turned sour for Greenberg just two years later. A new muse began cajoling Hartigan to paint life as she witnessed it from her home in Manhattan’s Lower East Side, and so her canvases soon were littered with “things from my window, push carts, fruit stands, passersby, the bridal things on Grand Street . . . mannequins in a window,” she said.

Greenberg was incensed by Hartigan’s new path. He withdrew his support and never wrote about her work again.

Hartigan, who lived from 1922 to 2008, didn’t do a U-turn away from abstraction. Rather, from the early 1950s on, she alternated between the abstract and the figurative for the rest of her career.

Too bad for you and your myopic critical eye, Mr. Greenberg. The rest of us are grateful Hartigan didn’t care diddly-squat about currying your favor. For us, the grace of Hartigan’s pursuit of her muses can be seen in the exhibition “Grace Hartigan: Retrospective,” which runs March 29 through May 26 at the Museum of Art-DeLand’s venue at 600 N. Woodland Blvd.

Hartigan’s pivoting between figurative imagery and abstraction makes for stunning juxtapositions in this retrospective, with works that hint of death and violence balanced by scenes of trippy clowns and playful creatures.

“My Fair Lady,” a 1989 oil work, depicts Audrey Hepburn’s Cockney-tongued character in that 1964 film. The portrait figure’s pouty-lipped uncertainty unveils the aching poignancy of a character who, in transforming from course flower seller to proper-speaking socialite, suddenly realizes she’s unsure of who her true self may be. The fact that Hartigan’s expressionistic technique exudes a certain “dashed-off” quality (shades of Pollock!) only heightens one’s appreciation of her skills.

Hartigan’s “Lady” is made even more captivating by sharing space with the painting next door, an astonishing pivot back to abstraction from 1991 titled “Matador.” Do the painting’s furious swirls and swaths of orange-red signify the matador’s cape – or the bull’s freshly spilled blood? Or, is that a prone human figure rendered in bold but abstract black lines below the maelstrom of orange-red? Could the splatter of orange-red be the blood of the matador? 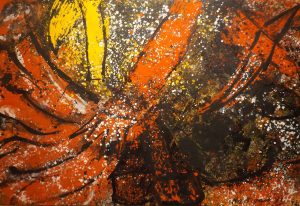 Few artists have ever so perfectly captured the violent ferocity of a matador’s “performance.” To remind one of the obvious, “Matador” is jarring proof that sometimes “truth” can best be rendered in ways other than realism, regardless of the creative medium. Yes, Mr. Greenberg, “Matador” scores a point for Team Abstract Expressionism.

Hartigan’s “pivoting” provides other, utterly riveting delights in this retrospective.

The bull, lion, antelope, bird and other creatures of the remarkable “I Remember Lascaux” are a homage to that site in France where amazing Paleolithic cave paintings were discovered in 1940. And Hartigan’s cubist brushwork also pays homage to Picasso, who famously expressed his awe after visiting Lascaux to witness the works of those Stone Age artists. 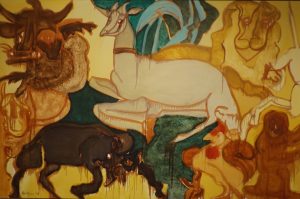 “Land and Sea,” a 1977 oil on linen, depicts animal legs, tails and fins rendered in banana yellow, browns, lavender, sea-foam green and various blue hues, while a gray, one-eyed beastie – perhaps an octopus – smiles beatifically. It’s a trippy tableau whose vibe, if not its style, would make the work be right at home in the Beatles’ animated film “Yellow Submarine.”

Using a similar color palette but even more fun is “Halloween Painting,” with its cheerful witch, skeleton and clown faces.

The style and subject matter of those two works and other Hartigan paintings led some art historians to lump her into the Pop art movement, which relied on imagery from popular and mass culture. But Hartigan expressly disavowed any connection to the Pop style or aesthetic.

As if to show how decisively un-Pop she could be, this retrospective also includes “Desert Storm,” a 1991 abstract that takes its title from the United States’ codename for its invasion of Kuwait during the Persian Gulf War. More blood reds surface here, in a Pollock-esque splatter that seems to obscure a simple black chair. The painting reeks of violent death and destruction.

For a spirit-lift after viewing that dark work, pivot over to Hartigan’s take on Shakespeare’s “A Midsummer Night’s Dream,” an oil on linen piece she completed just one year before her death in 2008 at age 86. The bemused smiles of Hartigan’s fairies and Puck the mischievous sprite seem to be saying, “Silly humans – why don’t you come join us in our world?” 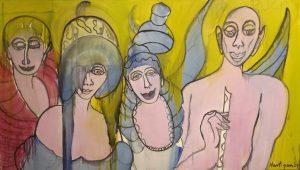