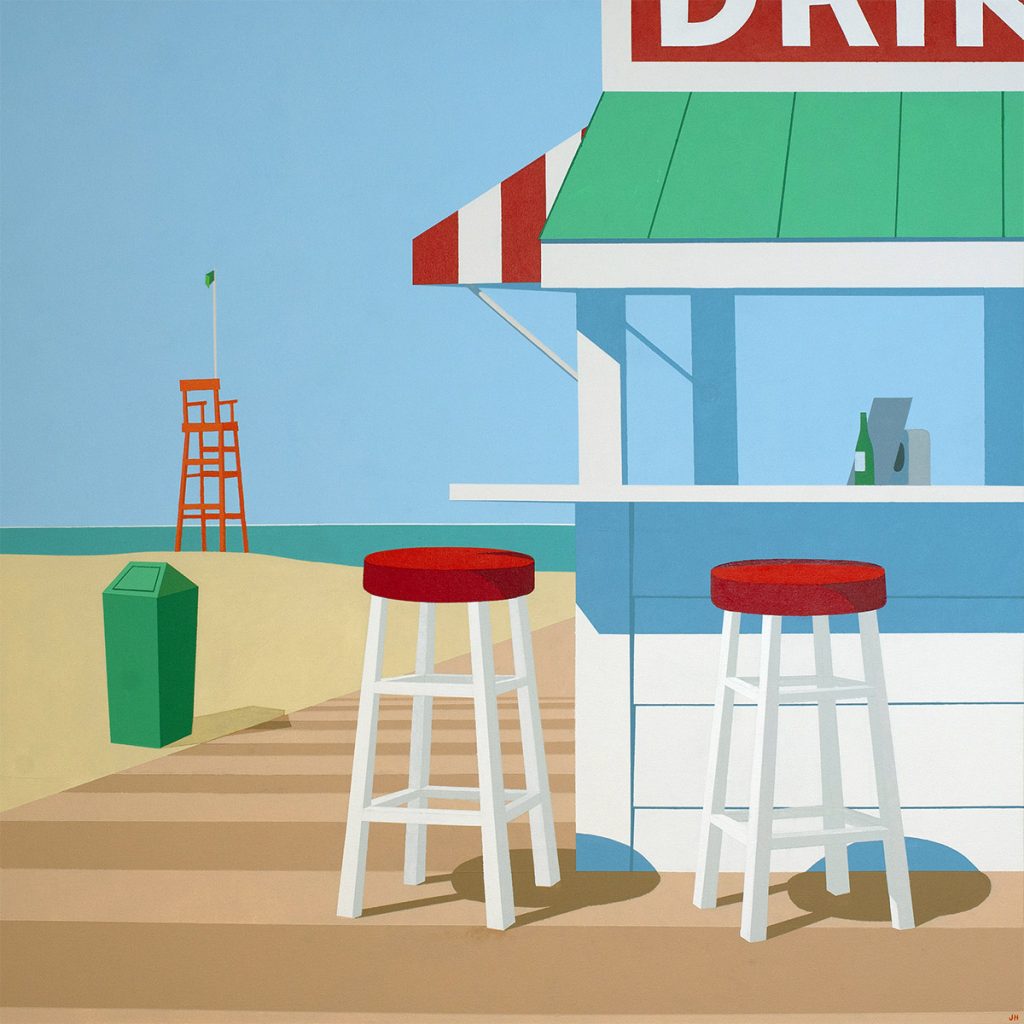 Artist Jim Houser was a frustrated abstract expressionist in the early 1960s. Then he took a walk to his mailbox.

“The story he used to tell is that he was dissatisfied because he knew he wasn’t a great abstract expressionist,” said his son, Jackson Houser. “He was good but not great.

“One day he was walking out to get the mail, and he saw the mailbox silhouetted against a plain sky and recognized ‘Now that is a great image. It’s not abstract expressionist at all, but it’s an image worth capturing.’ ”

The results of that fateful day can be seen in the exhibition “Jim Houser: Retrospective,” on display at the Museum of Art – DeLand from Oct. 26, 2018, through Jan. 6, 2019.
For the past 55 years, Jim Houser, who grew up in Jacksonville, Fla., has painted stark, deceptively simple scenes of sea shores, beach towns and intracoastal waterways – but not Audubon postcard scenes inhabited by shorebirds in flight, swaying palm trees, spikey palmettos or white-crested sea waves.

Rather, akin to the spirit of that walk to his mailbox, Houser has focused his artist’s eye upon humankind’s imprint, or encroachment, upon such places: seaside bungalows, lighthouses, stop signs, bait and tackle shops, street lights, empty beach chairs under beach umbrellas, railroad crossings, seaside cafes – all rendered in flat, sharply defined geometric shapes, little or no scenic detail, and a limited palette of colors.

And all people-less. Well, virtually: Of the 42 acrylic paintings in this retrospective, only one features a human figure.

The startling result is that the “vocabulary” of Houser’s work, both in subject matter and technique, is almost as much what he has left out as what he has put in.

His son Jackson likes the term “essentialism” to describe this lack of detail or ornateness of any sort – Jim Houser paints only that which is “essential” to capture a scene or a mood, an approach he shares with Edward Hopper.

In the 1920s, art critics coined the term “Precisionism” and even “Cubist-Realism” to describe the works of Hopper and Charles Sheeler, two artists that Jim Houser confessed to admiring at the reception for his exhibition.

In Hopper’s famous “Nighthawks,” the late-night diner – though viewed from a distance – can be seen to be free of clutter: no greasy spoons scattered about, no cash register, and not even enough kitchen paraphernalia to make toast.

And so it is in Houser’s people-less scenes of “Joe’s Market,” “Quiet Café,” “Cola Stand,” “RR Crossing,” “Beach House” and other works. The essentialism is enhanced by Houser’s extensive use of rectangular geometry and straight lines (the only curves seem to be those of a distant lighthouse, railroad crossing lights and the rare contour of the land). And his essentialism is enhanced by his minimal palette: Few colors get more than two hues (a light blue for seawater, a paler blue for sky, for example). Give Houser a 64-piece box of crayons and he’ll need only seven or eight sticks.

Whether one calls Houser’s art essentialism, Precisionism or Cubist-Realism, the startling effect on viewers of this “there is no there there” (to borrow a phrase of Gertrude Stein) is, ironically, a Zen-like expansiveness, where contemplation of the seemingly simple scenes leads the mind, and heart, to a greater panoply of moods, perspectives, insights – and questions.
Where are the people, and what happened to them?

Perhaps Houser’s obvious love of shapes and geometry simply relegated humans to a forgotten afterthought. His affection for forms is a reminder that beauty can be found not just in nature but in the everyday life of us humans.

Native Floridians will be familiar with the post-Labor Day exodus of summer tourists, when quite suddenly beach towns will appear as Houser depicts them: deserted, even ghostly and forlorn.

And yet coastal Florida’s sunlight – evoked perfectly in Houser’s cloudless, pale blue skies and in the shadows cast by beach chairs, cottages and stop signs – remains even if the people don’t, thus lending a sense of bonhomie and vitality to these works that, for many viewers, will exile any sense of forlornness.

As George Bulge, chief executive officer of the Museum of Art – DeLand, writes in his exhibition essay “Jim Houser: Focusing on the Irreducible”: The artist’s “oeuvre is rich in association. We don’t just see the painting, we are flooded by memories and feelings triggered by what we see ‘in’ the painting: by our memories and feelings about comfortable, seaside vacation homes, sitting on the beach with the one you love, and lunch at the boardwalk sandwich shop.”

Connie Houser, the 90-year-old artist’s late wife, who passed away in February 2018, was a writer and painter who created several books about her husband’s work. The blurb on “Tranquility: Paintings by Jim Houser” says the artist “is not only an exceptional painter but an amazing seer, who makes the reduction of the scenes seem so obvious that we wonder why we didn’t see them this way before.”

Connie Houser’s “The Letters: Portrait of an Artist, Jim Houser” astutely notes: “There is a profound degree of ‘suchness’ or Zen quality in Jim Houser’s paintings as well as a lyricism not unlike the clear concise resonance of Robert Frost’s shorter verse.”

And then there’s the painting “Red Swings II,” one of two anomalies in the exhibition. Two of the three red swings in this scene of an oceanside playground are in motion – but, of course, there are no children around. For the alert viewer, “Red Swings II” introduces a moment of both artistic and psychological surrealism, fleeting but palpable – as if this were a scene from a “Twilight Zone” episode.

Or, alternately, those moving swings recall Alan Weisman’s imaginative yet science-based, philosophical, nonfiction book “The World Without Us,” which paints an unsettling portrait of a human-less world.

Either way, gaze too long at these ghostly moving swings and one may have a difficult time embracing the idyllic charm of Houser’s other people-less scenes.

That other anomaly? It’s the painting titled “Connie on the Beach,” which depicts a blonde woman, viewed from behind and from some distance away, sitting on a green boardwalk bench staring out to sea. Two-thirds of the painting is pale blue sky.

Yes, it’s the artist’s late wife, painted in 2015 before her death. Their son Jackson said the work “may be one of the only paintings since 1962 or ’63 that has an actual human figure in it.”

It may be Jim Houser’s most “essentialist” painting of all, reducing life to its most desired quality: love.