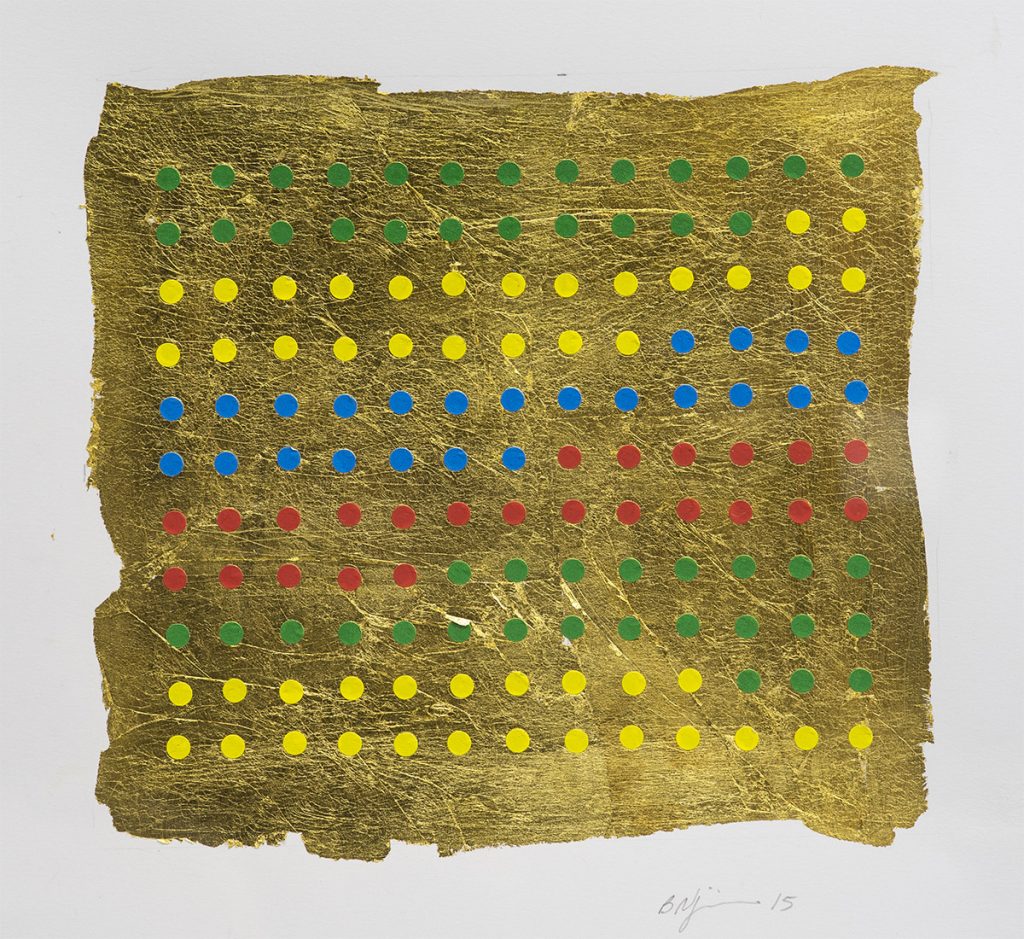 Is artist Barbara Neijna attempting to “portray” infinity in her exhibition at the Downtown Gallery of the Museum of Art – DeLand?

Neijna first encountered infinity, she says, when she was a child growing up in Philadelphia and her mother would send her outside to play.

“There was this huge hill that looked like a mountain to me — it looked like it was going up into space,” Neijna says. “She’d send me out on the hill to play with a bucket and shovel because there were no other children to play with. I didn’t want to be out there, but she said, ‘No, you dig, and if you dig deep enough, you’ll get to China. And if you get to China, you’ll find someone to play with.’ ”

Even as she “would dig ever so carefully and pray that I wouldn’t hurt anyone at the same time,” Neijna says, as a 4-year-old child she had a sense that she was “going to infinity. China meant otherworldliness. It meant beyond. It meant infinity. I was reaching for the other side.”

As an artist, Neijna – who has made South Florida her home since 1962 – is still reaching for infinity. Her exhibition “Barbara Neijna – Full Circle: Considering Infinity” is on display Nov. 2, 2018 through Jan. 13. 2019, at the museum.

The exhibition includes several series of works with multiple pieces in each, with such series titles as “Considering Infinity,” “Elements of Forever and a Day,” “Meditation on Infinity: The Endless Circle” and “Unbounded.” Single works include such titles as “Touch Infinity,” “The Value if Pi” and “Infinity Times 2.” (Curiously, the red, blue, green and yellow dots-within-squares of the latter work recall Piet Mondrian’s “Broadway Boogie-woogie.”)

Renowned Dutch graphic artist M.C. Escher, whose exhibition of dimension-bending works, “The Magical World of M.C. Escher,” ran at the Museum of Art – DeLand in early 2018, certainly sought to do so.

“It can apparently happen that someone . . . can feel ripen in oneself a conscious wish to use his imaginary images to approach infinity as purely and as closely as possible,” Escher wrote in his essay “Approaches to Infinity,” published not long before his death in 1972.

“I would say yes and no,” she says. “I wouldn’t put a single word as to what I’m trying to define.”

Which, of course, is to be expected from an artist exploring infinity – a single word just won’t do. And neither will a single circle, dot or square.

Neijna’s work “The Value of Pi” encapsulates the sly nature of “Full Circle: Considering Infinity.” “Pi” depicts hundreds of small white dots and a few bronze ones arranged in concentric circles around a coin-sized black center. Even viewers who aren’t math geeks will recall that pi is the ratio of a circle’s circumference to its diameter, and when expressed as a decimal number it is endless and never settles into a permanently repeating pattern.

That is, pi is infinite. Yet, while Neijna’s concentric white and bronze dots spill other the edge of three sides of her work, the right side falls short of the border and gives way to a black void. Pi, says “The Value of Pi,” may not be so infinite after all.

Other works – “Infinity Plus 1” with its small squares packed inside a circle, or “The End of Counting” with its gazillion gold circles packed inside a rectangle – lead a viewer to the opposite conclusion: Whatever value one tries to put on infinity, we can always add one more to the count.

Yet Neijna isn’t playing mere mathematical mind games. As George Bolge, the CEO of the Museum of Art – DeLand, notes in his exhibition essay, “On Infinity: Drawings by Barbara Neijna”: Her works “emphasize art’s role as an evoker of subtle moods and otherworldly musings and intimations – which can be seen as an aid to meditation rather than as a pictorial presenter of physical facts or as a shrewd organizer of nonrepresentational shapes, colors, patterns or changes.”

Her work, Bolge continues, “presents us with the extraordinary feeling that we are observing an exquisitely honed, creative sensibility waiting, with watchful urgency, at the frontier of human knowledge for something to ‘pass by,’ and when something does, or appears to, we see it take shape through her art.

“It may be something so intangible and fleeting that to capture it on paper becomes as difficult as capturing the flash of a golden fish deep within muddy waters, or the bursting into momentary light of a firefly . . . . If anyone will ever register even the gentlest caress of an angel’s wing, it will be she.”

Bolge’s astute observations find a striking parallel in, of all places, the 1984 book “The Fourth Dimension: Toward a Geometry of Higher Reality” by Rudy Rucker, who earned a doctorate in mathematical logic from Rutgers University. Taking Edwin Abbott’s famous “Flatland” as his jumping-off point, Rucker provides the science – in everyman terms – to back Bolge’s intuitive take on Neijna’s art.

Indeed, consider Neijna’s series “Elements of Forever and a Day,” with its depictions of various portions of black circles or half-circles in fields of off-white. Viewers will sense that those black

Rucker is attempting to convince us that fourth, fifth and even higher dimensions exist unseen, right beside us. Neijna’s art (except, perhaps, for that ambiguous “The Value of Pi”) makes the same case.

Neijna, who earned her BFA from Syracuse University and studied at the Academia Belle Brera in Milan, Italy, is known for her large-scale, outdoor geometrical sculptures and installations in public spaces in Philadelphia, South Florida, Tampa, Atlanta and elsewhere. Her works are also in the collections of the Smithsonian Institution in Washington, D.C., the Musee du Pantheon National Haitien in Haiti, the Boca Raton Museum and Art Center, and other museums.

The two-dimensional works of “Full Circle: Considering Infinity” are part of a continuum with her sculptures.

“All of the large work comes with the body of work that’s two-dimensional,” she says. “Drawing is a very intimate way and a very personal way of beginning a concept. It’s an evolution to larger-scale work. The imagery that you see here (at the Museum of Art – DeLand) is imagery that has existed since 1960 in my work.”

That question — is Neijna attempting to “portray” infinity? — returns her to her childhood experience of digging to China – to infinity.

“That was something very special to me that stayed with me,” she says. “I mounded up the earth, and the mounds were beautiful. It felt velvety and wonderful.”

Her art is a similar exploration.

“It doesn’t have to do with math per se,” she says. “It has to do with order. It’s order. It’s beginnings and endings. It’s where did we come from and where are we going? It’s a big picture. It’s creating stability, that kind of thing.

Whether Neijna has “portrayed” infinity, she certainly succeeds in prodding viewers of her art to contemplate infinity.

Regular gallery admission is $5, free for museum members and children 12 and younger. Information: 386-734-4371 or moartdeland.org.